The position of the left-back has developed into a very popular position in the last decade. The reference players in this position also became better known and more valuable. The need for good left-backs is often very high, and at the same time difficult to clothe.

Fredrik is in itself a classic left-back with “offensive urge” (correctly one would have to say left full-back). He has already played games on the left wing and could do it in one 5-3-2 System even the entire left side “plowing”. Therefore, you could also use him as a left midfielder if necessary.

Although he acts as a left foot on the left side, of course, preferably with the left, he is a player who, whenever possible and necessary, can easily pull in the middle and also crosses and passes with his right foot. It is agile, brave and strong dribble, so that he often finds a way out even under pressure from several opponents.

He most often plays his strengths by quickly overcoming his opponents (also fast on the move with ball and dribbling) to then flank flanks into the center over the wing, whenever possible. As already mentioned, however, he does not lack alternatives, if the way over the wing is blocked. He definitely has his advantages on the offensive rather than on the defensive.

He is physically robust and with its 1.81m is one of the “larger ones” LAVs, is surprisingly rather bad in aerial combat due to poor timing and lack of bounce, he could also use his otherwise robust body better in defensive actions. Generally, he doesn't seem to be a player, who likes duels, there he and must surely still grow (have to), making it a complete one “LOW” becomes.

Currently in Norway “unrivaled” regarding the potential at the LV position at his young age. He may have a clear conscience at a decent level “Europa League player” grow up, with air up, provided he also increases performance in stronger leagues and, as should be expected, also in the Norwegian national team. He has already run through the U-teams.

It is a “Bargain-Player” if you estimate his real transfer at 1-2mio, what we do with it. A player with very good prospects, to become a regular in the Norwegian national team in the future, with constant development. With good performances in a next higher league strength such as Russia (see comparison values ​​pictures), its market value can be doubled or tripled quickly. 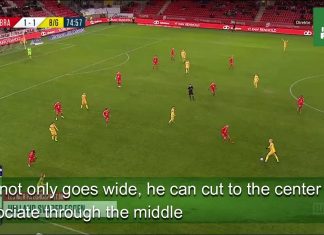